Just outside Tay Nihn and 60 miles northwest of Ho Chi Minh City is the Great Temple or Holy See, the center of the intriguing Cao Dai sect. Cao Dai is a syncretist Vietnamese religious movement that incorporates aspect of Buddhism, Taoism, Confucianism and even Catholicism.

The Cao Dai Temple (as it is more commonly known) was begun in 1933 in a unique architectural style that reflects its blended traditions. Most people visit on a day trip from Ho Chi Minh City.

Cao Dai (a.k.a. Dao Cao Dai or Caodaism) is a syncretist Vietnamese religious movement with a strongly nationalist political character. Cao Dai draws upon ethical precepts from Confucianism, occult practices from Taoism, theories of karma and rebirth from Buddhism, and a hierarchical organization (including a pope) from Roman Catholicism.

In 1919 Ngo Van Chieu, an administrator for the French in Indochina, received a communication from the supreme deity during a table-moving séance. Chieu became the prophet of the new religion, which was formally established in 1926. Caodaists believe this ushered in Tam Ky Pho Do or the Third Period of Salvation, a period marked by direct revelation between heaven and earth. Caodaism is the Dai Dao or great religion of this period.

The Great Temple was built between 1933 and 1955. A Cao Dai army was established in 1943 during the Japanese occupation of Indochina. After the war the Cao Dai was an effective force in national politics; it first supported, then opposed, Premier Ngo Dinh Diem. In 1955–56 Diem disbanded the Cao Dai army and forced the sect's pope, Pham Cong Tac, into exile.

After the communist takeover in 1975, Cao Dai was reportedly repressed by the government. Centers of worship were established in Vietnamese refugee communities abroad, however, and it was legalized in 1985.

By the early 1990s Cao Dai was reported (such as in theEncyclopaedia Britannica) to have some two million adherents in Vietnam, Cambodia, France, and the United States. Today, Cao Dai adherents number as high as 6 million, at least according to Cao Dai sources.

The faith is named for its supreme being, known as Cao Dai("High Tower"), a Taoist epithet for the supreme god. Cao Dai is seen as the same God honored in all major world religions, but the chosen term avoids gender, personality or other earthly attributes.

Caodaists believe that all religions are the same in principle. CaoDai.org explains: Cao Dai's pantheon of saints includes such diverse figures as the Buddha, Confucius, Jesus Christ, Muhammad, Pericles, Julius Caesar, Joan of Arc, Victor Hugo, and the Chinese revolutionary leader Sun Yat-sen. These are honored at Cao Dai temples, along with ancestors.

Cao Dai followers strive for inner peace and harmony in the world and try to gain religious merit and avoid bad karma. Cao Dai encourages obedience to the three duties (those between king and citizen, father and child, husband and wife) and five virtues (humanity, obligation, civility, knowledge, reliability) of Confucianism.

Cao Dai's organization is patterned after that of Roman Catholicism, with nine levels of hierarchy including a pope, cardinals, and archbishops. Worship involves group prayer in the temple, elaborate rituals and festivals (more details under "What to See" below).

In addition to the Great Temple, there are around 1,000 other Cao Dai temples in this part of Vietnam.

What to See at Cao Dai Temple

Constructed between 1933 and 1955, the Great Temple of Cao Dai closely resembles a Christian cathedral in its architecture - two square towers, a long central nave with upper gallery, and side aisles. The altar, an apse and ambulatory are at the opposite end from the entrance, just as in a typical church.

The exterior and interior of the Cao Dai Temple are bothextravagantly decorated, incorporating symbols, abstract designs and images of saints. The high ceiling is painted sky-blue with fluffy clouds and the floor tiles have busy patterns. The dragon-encrusted columns that run the length of the nave number 28, representing the 28 manifestations of the Buddha. Seven-headed cobras represent the seven human emotions.

The three principal colors of Cao Dai are yellow (for Buddhism), blue (for Taoism), and red (for Christianity), and these appear in worshippers' robes as well as the temple. The most important symbol is the Divine Eye, representing God, which also appears in followers' homes. It is a left eye, because God is Yang, and Yang is the left side. It has a ying-yang symbol in the pupil.

There are four ceremonies with chanting each day: 6:00 am, noon, 6:00 pm, and midnight. An orchestra of 10 musicians and a choir of 20 youths lead the service in prayer and hymns. The hymns sound western, but the accompanying music is traditional Vietnamese.

One of the most memorable sights at the Cao Dai temple is thesea of worshippers who dress in flowing robes and assemble in orderly rows during a ceremony. Men sit on the right and women on the left.

Most worshippers are lay followers, who wear pure white robes. Men with the rank of priest and higher have brightly colored robes reflecting their spiritual allegiance: yellow (symbolizing Buddhism and virtue), blue (Taoism and pacifism) or red (Confucianism and authority). Bishops and cardinals have the Divine Eye emblazoned on their headpieces.

Visitors are warmly welcomed at the Cao Dai Temple and may watch ceremonies and take photos from the galleries. Visitors are only asked to wear trousers or skirts covering the knee, remove their shoes before entering, and remain as quiet as possible during ceremonies. The noon ceremony always has the largest audience, since most visitors are day trippers from Ho Chi Minh City.

Contact us if you wish to visit this Holly Land. 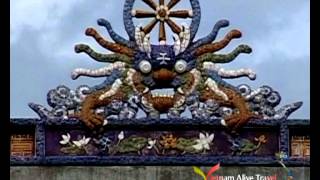